When the first film projectors were put together, in the early history of cinema, people were looking for a compromise between the cost of film material and what was considered to be “acceptable” quality on the screen.

For the silent movies of those days, a frame rate of 16 or 18 frames per second became the standard. Despite the fact that light sources at the time had a very limited capacity, the shutter had to made two additional interruptions of the projection light between the projection of two frames to avoid too much flicker. So shutters on early projectors always had three blades. In the late twenties the talkies came along, and a projection frequency of 18 frames per second was no longer sufficient for good sound reproduction. Projection speed has to be increased. With this higher number of projected images per second one masking section of the shutter could be omitted. Pictures were now being projected at a rate of 24 frames per second. As the human eye would definitely see the necessary light interruptions as “flicker” the shutters got either 2 blades or were of single blade design, running at double speed to get the number of light interruptions to 48 per second. This gave an almost flicker free impression to the viewer whilst the loss in the amount of light coming through was not too excessive. In order to project archival material on a modern 35mm projector, the frame rate should again be reduced to 16 or 18 frames per second. This can be achieved with a modified mechanical transmission or with the use of an inverter. The situation with the shutter however is quite different. Because of the usual two bladed shutter, and the lower image projection frequency a very annoying flicker effect will show itself . To solve this problem, Rosbeek techniek has developed a series of custom-made 3-blade shutters. As the picture shows, we’ve even succeeded in the manufacture of a complex 3-blade cone shutter. The combined speed reduction of the projector, paired with the installation of the three bladed shutter will render the proper results when showing films from the silent era. 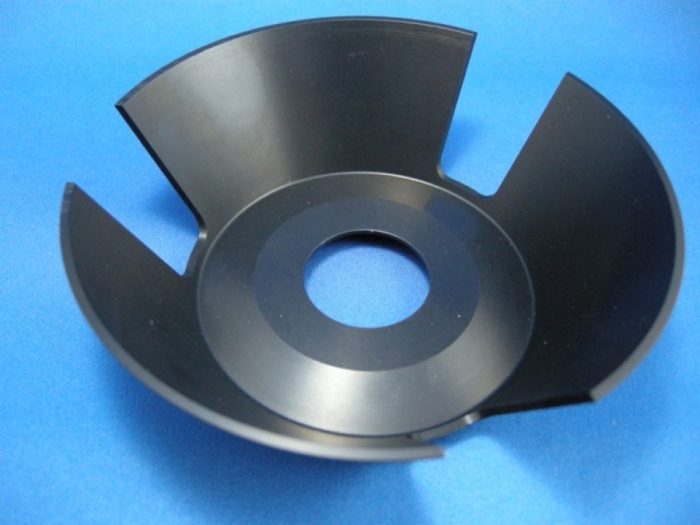